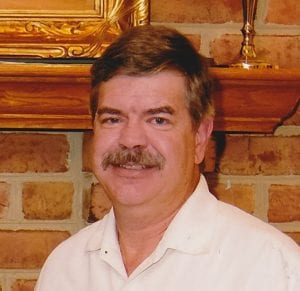 Charles O. “Chuck” Thayer IV ‘80 resides in Melbourne, FL with his wife Kathy. They are the parents of Ashley Thayer Schmid of Winter Garden, FL and the late Chad Thayer. He is the son of the late Charlie and Jerry Thayer. Chuck’s sister Pam Thayer ’74 and niece Whitney Martino Price ’05 have also graduated from Notre Dame while niece Taylor Martino ’19 and nephews Kobe and Clay Martino ’21 will soon join that list. Chuck graduated magna cum laude with a B.S. in Computer Science in 1984 and a M.S. in Computer Science in 1988 from WVU. Upon graduation, Chuck went to work for Harris Corporation in Melbourne, FL. In 1991, Chuck took a job at Northrop Grumman where he remains as a Staff Engineer. Chuck has had significant contributions to some of the most advanced defense, communications, and space systems over his 35-year career as a software engineer. Known for his gift of gab, Chuck regularly gives key customer presentations during formal reviews. Two experiences from his years at Notre Dame have played a significant role in Chuck’s adult life. He was a 3-year letterman on NDHS’s baseball team that went 60-15. A highlight was pitching back-to-back no-hitters during his senior season. Chuck was able to continue to successfully play and manage amateur baseball for over 25 years, twice being selected as Manager of the Year as well as being inducted into the Florida Space Coast Baseball Hall of Fame. Another influence came as a member of the Blue Haze Band with other NDHS students, a band that evolved into the popular local band Amici. Chuck continued what had started as a guitarist during school mass to becoming a vocalist for a couple of popular Space Coast classic rock bands, leading to twice being nominated as favorite vocalist for the Brevard Music Awards. Chuck is a member of Holy Name of Jesus in Indialantic, FL.

Chuck will be honored at the Irish Legends Gala on Saturday, April 13 at Via Veneto. For sponsorship/reservation information, go to notredamewv.org.