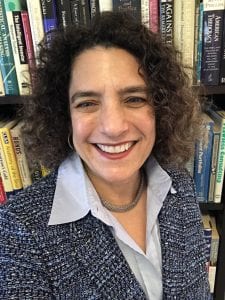 Clara Basile graduated valedictorian from Notre Dame in 1976. She is the daughter of the delightful Rafaella “Folly” (Romano) Basile and the late Tom Basile, both former Irish legends. Clara’s two siblings, Tom and Mark were also Notre graduates. Basile, Romano, Arco and Scott have a proud heritage and deep ties to local Catholic schools. Among them are many “Irish Legends,” most notable is Clara’s uncle, the late Coach Angelo Basile, for whom the basketball court is named. Clara had many honors and successes during her time at Notre Dame. She had the distinction of being chosen the school’s first Governor of Girl’s State. Classmate Sam Spenia immediately followed with a win at Boy’s State. It was the first time in WV history that two students from the same class took the state-wide honor in the same year. In true Irish spirit, Clara attended the University of Notre Dame in Indiana accompanying her brother Tom and Carmin Grandinetti, who were accepted in the prior two years. She was proud to be among one of the first classes to be admitted during a time when most women attended St Mary’s across the lake. Clara left Notre Dame for San Francisco where she still lives today. She studied to be an opera singer and ran a very successful restaurant and bookstore for 7 years. With some prompting by Clara’s father, who ran his own financial services firm, she changed course mid-stream to work as a floor trader on the option trading floor at the Pacific Stock Exchange. The timing was fortuitous. The combination of affordable home PCs, the advent of option trading and the proliferation of business news and data helped launch a successful career in finance. After one year at the Pacific stock exchange, Clara was hired by the prestigious San Francisco investment firm Bailard, Biehl and Kaiser. There she quickly rose from international research assistant to VP of foreign currency trading. In 1992, after four years at Bailard, Clara and three senior partners left to start Avalon Capital Management, a comprehensive wealth management firm in Redwood City, CA. Today, Clara is the senior portfolio manager at Avalon and the company’s CEO. She has spent 30 years counseling clients and developing models for managing global diversified investment portfolios. Her quantitative analytical model, Avalon Dynamic Allocation, is recognized for its ability to both capture upside return while cushioning assets during turbulent markets.

Clara will be honored at the Irish Legends Gala on Saturday, April 13. Sponsor/reservation information for the event can be found at http://notredamewv.org