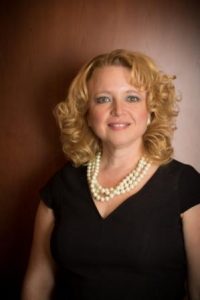 Elizabeth Kniska Keyes is Chief Operating Officer at the American Pharmacists Association (APhA) and Executive Director of the APhA Foundation. She is responsible for the overall operations of the organization and oversees the philanthropic arm of APhA. In February 2018, Elizabeth marked her 25th year of employment with APhA. She has had numerous positions including Director of Education, Senior Director of Strategic Alliances and Business Development, and Vice President of Business Operations. Prior to joining APhA and for the first half of her tenure there, Liz also worked as a pharmacist for Peoples Drug Stores and CVS Pharmacy in the DC area. These practice experiences, in addition to growing up working at her Uncle Carl Furbee’s store, Furbee’s Pharmacy, in Bridgeport, shaped her passion for pharmacy practice and patient care advocacy. Liz has had many notable accomplishments. She led the development of the Pharmacy-Based Immunization Training certificate program that to date graduated over 400,000 national and international immunizing pharmacists. She’s also been recognized as one of the top 100 graduates of the WVU School of Pharmacy and was inducted into the school’s Centennial Hall of Fame. She received the Wheeling University Alumni Hall of Honor Award for her outstanding career achievements. Elizabeth earned a bachelor’s degree in pharmacy from WVU and a BS degree in biology with a minor in technical writing from Wheeling Jesuit University. She’s a graduate of the Executive Management Program for Leadership at the Wharton School of Business. In addition to the strong education foundation provided by Notre Dame High School, Liz highly values her liberal arts education at WJU. Finally, her most important position is that of mother to 13-year old Claire, wife to very patient Kevin, and daughter of Marion Kniska. Liz and her family reside in Chevy Chase, MD…and West Virginia in spirit!