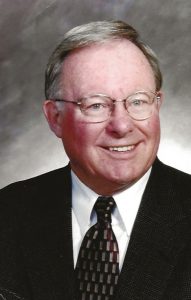 Joe Neely enjoyed nine years as a coach and teacher at Notre Dame High School, an experience where the challenge of developing the student by emphasizing character, integrity, and academic growth became a rewarding one. He taught physical education and social studies and coached basketball, football, and track. His 1968 basketball team won twenty games, the 1970 football team qualified for the state playoffs, and track teams received regional honors. Joe graduated with a Bachelor’s degree from Salem College, a master’s degree from West Virginia University, and advanced studies at University of Virginia’s Darden School of Business and Michigan State University. After leaving Notre Dame, Joe coached basketball and was the Athletic Director at Alderson-Broaddus College. A decision to change careers resulted in being a State Farm Insurance Agent. He soon became a part of the company’s leadership team in the Baltimore/Washington DC markets. He was later appointed as an Executive Assistant to the president’s office at State Farm and then soon after as a Vice President. Retiring in 2002, he has devoted his time to the Fellowship of Christian Athletes and various boards and foundations. Joe and his wife, Pat, just celebrated their 60th wedding anniversary, have four daughters, two sons-in-law, and four grandchildren. “God has blessed me with a great family and lots of unforgettable experiences and accomplishments. One of the cherished memories were those years at Notre Dame High School. I’m honored and humbled to have been a part of this school’s history.”