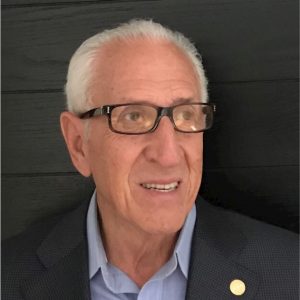 Sam Granett, who grew up in the NorthView section of Clarksburg, is a 1964 graduate of Notre Dame. He and his wife, Barbara, live in Austin, Texas. He is the son of the late William (BG) and Angeline Granett. His sister, Sondra Colombo taught at Notre Dame High School and was honored as an Irish Legend in 2018. His oldest sister, the late Kathryn (BeBe) Gonsorcik, was a registered nurse in the Clarksburg area. The Granetts are most proud of their two daughters, Ellen and Spencer. Ellen, a graduate of the University of Texas in business, is a mother of two and involved in a successful software start-up with her husband, Andy. Spencer received her undergraduate degree from Cornell and a PhD in Biochemistry from UC Berkeley. She is a mother of two and a professor, along with her husband, at Western Washington University. After serving in the military, Sam entered the business world. With over 30 years of experience, he has worked at all levels of management. After working in the large corporation world, Sam formed his own companies, NorthView Asset Management, a Registered Investment Advisory firm that he sold in November 2019, and NorthView Advisors, an Investment Banking company. Sam’s major assignments in the military were serving in Berlin, Germany and Southeast Asia. In Vietnam, Sam was awarded the Silver Star and Bronze Star for Valor. He holds degrees from the United States Military Academy at West Point and the Harvard Business School.