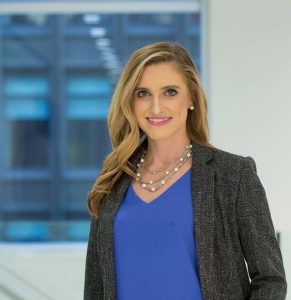 Maryrose J. Burns is an proud alumna of both Notre Dame Catholic High School and St. Mary’s Catholic Grade School. She continued her education by earning a bachelors degree in finance from Piedmont College, where she was a four year collegiate athlete on the softball team.

She began her career in finance with the asset management firm, VanEck, working on the sales desk in Tampa, Florida for five years. Today, Maryrose remains with VanEck as the Regional Vice President overseeing the Southeast Financial Advisor Division, and recently she has relocated to Washington D.C.

During her tenure in Tampa, Maryrose actively served as a parishioner at Christ the King Catholic Church. She was a leading member of the Council of Catholic Women, and involved in several other philanthropic organizations. With her best friend, Michelle Gilbey, they founded Sip & Spirit in 2017. In her spare time, she was a regular member of the Wednesday night Irish 31 Run Club, during which she completed over 150 runs with her friends.

Maryrose is a Notre Dame legacy. Her mother, the late Deborah LaRosa Burns, a 1974 graduate was inducted as an Irish Legend in 2012. Her father, Pat Burns, continues to be her biggest cheerleader, and he resides in Fairmont with her stepmother, Anastasia. Maryrose has two best friends that happen to be her two big brothers: David lives in Fort Myers, Florida; and J.P., his wife Ashley, and his son Patrick reside in Grafton. Her grandmother, Joan Burns & godfather, Dan Burns along with many family members are celebrating in this achievement with Maryrose. She would like to make special mention to the Romano & Morrison Families who have always loved her like their own.

Maryrose will be presented with the distinguished young alumna award at the Irish Legends Gala on March 28 at Via Veneto. Go to notredamewv.org for sponsorship/reservation info.