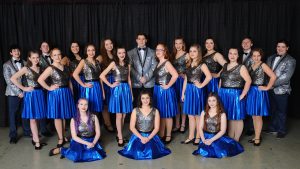 CLARKSBURG, WV – The Performing Arts Conservatory at Notre Dame High School has received a statewide award from a national organization.

Performing Arts Conservatory (PAC) Director Jason A Young proudly announces the program as the recipient of the National Federation of State High School Association’s (NFHS) Heart of the Arts Award for West Virginia.

The NFHS developed the Heart of the Arts Award in 2013 as a way to recognize individuals and groups that exemplify the positive ideals of the performing arts that are the core mission of education-based participation in arts and activities. Notre Dame High School (NDHS) was notified on April 20, 2020, by James Weaver, the Director of Performing Arts at NFHS that the PAC at NDHS was selected by the NFHS Heart of the Arts Selection Committee to receive the award for West Virginia.

“We are obviously very excited, but also humbled and a little shocked, to have our program recognized in such a meaningful way,” said Young. “Our students attend a lot of festivals and competitions and receive a lot of accolades for their performances, but an award like this speaks more to the principles that the program is founded upon and the standard of education that we strive to maintain.”

Founded in 2015, The Performing Arts Conservatory at Notre Dame High School is currently the state’s only unified 7th through 12th grade academic program that focuses on acting, dance, vocal music, instrumental music, and performance theory. Powered by The VTC Academy at The Vintage Theatre Company, the PAC at NDHS offers specialized training for students who are choosing to pursue a career in the performing arts and offers an introduction to the life skills provided by arts training that assist students in becoming well-rounded human beings. It is the goal of the PAC at NDHS to produce students who can be successful in competitive post-secondary performing arts programs and who are life-long learners and consumers of the performing arts.

“From the very beginning of the planning process for the PAC, it was impressed upon me the importance that Notre Dame places on educating the whole person,” said Young. “The school’s motto is ‘Education through faith, knowledge, and service.’ They want their students to have meaningful experiences academically, athletically, and artistically with all of those experiences anchored by the community of faith that the school creates.”

Notre Dame High School principal Julie Frosch believes that participation in the PAC at NDHS enhances students’ academic achievement. Frosch also understands and celebrates the importance of the program to the school as a whole.

“The students of the Performing Arts Conservatory are a marvelously talented group of young people who actively learn by participating in several aspects of the arts from acting to music to dance. These skills assist our students in academics by enhancing their critical thinking skills, building their self-confidence, enforcing teamwork strategies, and promoting public performance,” said Frosch. “The PAC students contribute creative thoughts and ideas to our school environment in and out of the classroom. We are blessed to have such a strong program here at Notre Dame!”

“The PAC is important to Notre Dame because it exposes kids to the arts. The arts are important; whether it be performing on the stage or sitting in the audience, it’s all important. The PAC gives kids who don’t participate in sports a time to shine. It gives everyone a place where they can flourish and thrive,” says Fittro. “I know if it wasn’t for being a part of the PAC since I was in 8th grade and working with the wonderful teachers, I wouldn’t be half the performer or person I am today.”

The PAC at NDHS is home to both a middle school and a high school Thespian troupe. The middle school Thespian troupe, under the direction of Trina Byard, features students in 7th and 8th grades. In only its second year, the troupe has already made its mark, having its competitive one-act play nominated as a wild card selection to the State Thespian Festival for two consecutive years.

The high school Thespian troupe, under the direction of Jason A. Young, is a past champion of the state’s one-act play competition. In 2017 a group of five seniors took FUTURE, HERE, a play by West Virginia playwright Jeremy Richter, to the Chapter Select Showcase at the International Thespian Festival (ITF) in Lincoln, Nebraska. Several students have also won individual championships, high honors, and had the opportunity to compete at ITF through the National Individual Event Showcase (NIES.) This year, the high school’s competitive one-act play,Application Pending, was rated Platinum Superior at the West Virginia Theatre Association Annual Conference and took home first prize at the West Virginia Area IV Thespian Festival before recent school closures canceled the State Thespian Festival.

Under the direction of Sarah Nale and Joshua Stubbs, with choreography by Kim Bell, The Shamrocks are the musical ambassadors of the PAC at NDHS. Made up of both middle school and high school students, The Shamrocks have a full show choir competition season schedule including the State Show Choir Festival every spring. At the 2018 state festival the group won Best Vocals with their show Hitsville, USA. They followedthat success with a first runner-up finish in 2019 with their inspirational show Breaking Free. This year’s show, The Rhythm of the Rain, took home several awards at individual competitions including a first place finish at the Grafton Cavalcade. Like the State Thespian Festival, this year’s State Show Choir Festival was also canceled due to statewide school closures.

In addition to the show choir, the PAC at NDHS students participate in a Mass Choir, also under the direction of Nale and Stubbs. The Mass Choir takes part in the school’s multiple special masses throughout theyear, including the Mass of Thanksgiving, Lessons and Carols, and Baccalaureate.

The Swingin’ Irish jazz quartet, led by Wayne Rowand, is made up of the program’s only seniors. The group, which focuses heavily on music theory and improvisation, plays regularly for in-school events like ArtiGras and community events like The Irish Legends Gala. The ensemble also participates in the West Virginia Secondary Schools Activities Commission’s (WVSSAC) Regional Band Festival.

“I believe the PAC has passionate teachers guiding the talented students of active parents, all the while being supported by a visionary administration,” said Young. “Receiving an award like this, in a lot of ways, affirms what I already know and makes me very proud.”

Individuals interested in information about the Performing Arts Conservatory at Notre Dame High School should contact Counselor of Admissions Jacqueline Reed at jacqueline.reed@notredamewv.org.