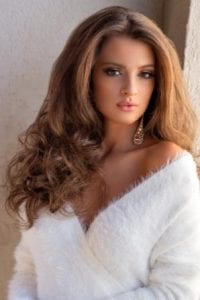 Sophia Martino had dreamt of participating in the Miss WV Teen USA pageant. Recently, her dreams came true as, not only did she compete, she won the pageant and was crowned Miss WV Teen USA.

After months of preparation, Martino spent two days competing at the Clay Theatre in Morgantown. Following success in the preliminary round, Sophia competed in active wear, evening gown, and an on-stage question where she spoke about worldwide female equality.

Twenty-one contestants took part in the competition including fellow Notre Dame student Gracie Marsh who finished in the Top Eleven. Martino said, “Having Gracie there was so comforting because we are close and we helped encourage each other. She was the first person to congratulate me.”

Martino will now go on to compete in the Miss Teen USA Pageant sometime in April or May. Reflecting on winning, she said, “I’m on cloud nine. Ever since I was a little girl, this is the pageant I’ve wanted to compete in. To take home the sash and crown is such an honor.”

Running on the platform of helping the hungry, you can follow Martino’s reign as Miss WV Teen USA on Instagram at misswvteenusa and facebook at Miss West Virginia Teen USA.