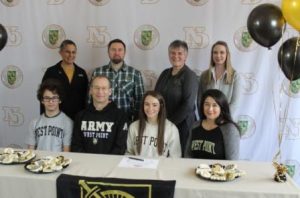 Sophie Talkington will attend the U.S. Military Academy at West Point to continue her track and field career. Talkington is a two time West Virginia State Pole Vault champion and chose to attend West Point after the coaches at the institution showed an interest in her athletic ability. She said, “West Point has a great history and I feel it’s the best place for me to develop. I want to live a life of service and they are invested in my future as both a person and an athlete.”

After a rigorous admissions process, Talkington received nominations to the U.S. Military Academy from Senator Shelley Moore-Capito and Congressman David McKinley. She is excited to attend West Point but is grateful for all the support she has received from many people at Notre Dame. “Notre Dame has been a great experience,” she said, “Faith has led me to West Point.”