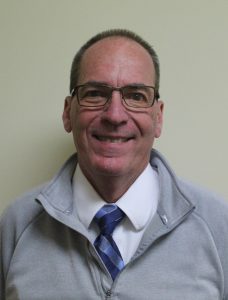 Rick Loser has been associated with Catholic Education in Clarksburg for almost 40 years. Rick was born in Montgomery, West Virginia on April 24, 1956. He is the son of the late James C. Loser and Mary Katherine “Katie” Nale Byrd. He is the second of four children. After his family moved back to the Clarksburg area, Rick attended public schools in Harrison County and was a member of the first graduating class of Liberty High School in 1974. He graduated from West Liberty State College (now West Liberty University) in 1978 with a Bachelor of Arts degree in elementary education with a specialization in general science. He attended graduate school at Florida State University where he studied educational administration. Rick began his teaching career as a substitute in Harrison County schools. He began teaching at St. Mary’s in 1981, working as the middle school science teacher. He then became the fourth grade teacher where he stayed for over twenty year. He then specialized in teaching K-6 science. Rick has worked as Notre Dame golf coach, boys and girls varsity tennis coach, middle school girls basketball coach, and girls varsity basketball assistant coach. He now serves as assistant principal and finance director at St. Mary’s. Rick’s pastimes include playing golf, watching sports, and watching movies.