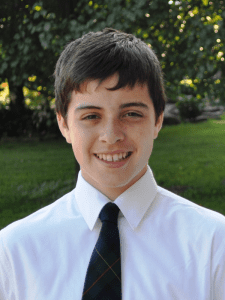 Alex Altenburg, a freshman student at Notre Dame has qualified for the National History Bee which will be held in Washington, DC on April 26. Alex qualified for the national competition by performing well at the regional history bee which was held in Parkersburg on Martin Luther King, Jr. Day. Ken Frosch, who is now in his sixth year as the coach of the academic teams at Notre Dame, is pleased with Alex’s accomplishment in qualifying for the National History Bee. Ken said, “For Alex to qualify as a Freshman is great, he is an energetic, bright student who is willing to work very hard. He has shown tremendous leadership for someone so young.” Alex will attend the competition with his Father, Gary, his Mother, Robin, and his sister, Alexis. He is excited about competing and looking forward to spending time in Washington, DC.

About the Author: Rob Wickham